Coming Back to Life

Instead of devoting the month of January to my running resolution, I spent the weeks dying.  I picked up a rather wicked cold while on holiday in England. I did not, however, let even this resilient virus slow me. I hit the workouts with the ravenous desperation of someone who overindulged in every beverage, snack, meal, and dessert on vacation. At my sickest week, I crammed 8 workouts and a rest day into the 7 days. While I kept pushing myself, my performance was borderline tragic, and all it earned me was mutating my English ailment in a raging sinus infection. 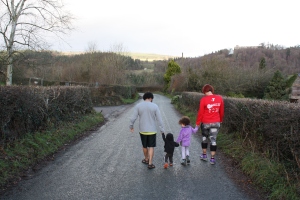 I continued to workout more out of a groping for routine and an attempt at mental balance. Unfortunately, I found my crippled state pretty discouraging. Particularly with running. Running seemed to be so impossibly hard and so completely unenjoyable. I was starting to question if maybe my time with running had passed. If I no longer found joy in it, what would the point be? But maybe I should have realized that running 6 miles in the snow was a horrible idea while my sinus were so full of fluid that it was spilling into my ears.

However, pumped full of antibiotics and steroids, I am starting to glimpse health again. After a month, I was beginning to adapt to the illness and forget what it felt like to not be sick. I crested a peak this week though. Suddenly, my workouts felt incredible! Suddenly, I was able to push to my limit and not dissolve into a coughing fit that resulted in compulsive heaving.

It started with zumba yesterday. I danced in motions that felt natural to my body. I lost myself in the melody and the beat until I did not notice my heart racing or sweat pouring. At the end, I realized I was not dying. I finally felt good again. Sated.

Then tonight, I had an amazing run. Trisha and I hit the run club 10K hard, harder than we have in months. The weather was chilled; my lungs were cooperative. At times, it felt like my legs flew unaided.

In the shortest terms, running felt like running again. It was everything I remembered it to be and everything I was missing about it.

My breathing was not strangled; it flowed in a way to fuel me. My form solidified. I found my chest lifted, shoulders rolled down, hips tucked in above legs that found long strides. It felt like all the work I had been doing for months was finally evident. The way I ran just felt right. I even found clouds of float punctuated along the route. It had been so long since I had such a pleasant run that it almost felt foreign.

I know every run will not be this blissful. I know that extremely well. More often than not, the runs will not be so euphoric. However, I also know to take the experience, suck all the joy out of it, and stow it to remember why I do this to myself week after week.

Two survivors search the ruins of America for the last strain of humanity. Marcus believes they are still human; Parker knows her own darkness. Until one discovery changes everything.

Beatrix woke up in a cage. Can she survive long enough to escape, or will he succeed at breaking her down into a possession?

I am fully aware that a new year is nothing more than an arbitrary cycling of the way we humans track time; however, in our minds and in our culture, it represents a fresh start. I am willing to entertain convention to create a mental break for myself, to permit myself to wash the trials and mistakes of last year from the present and file them more distantly in the past. I embrace being given a blank slate to start coloring on again.

Last year saw me desperate and crazed to claw my way back into the self that existed before my last child was born. It took half of that ill-fated journey for me to have the low level epiphany that such a reversion was physically impossible. Yet, even with realigned priorities and clarified expectations, I still did not see the results I wanted on my body, in my running, or in my fitness in general.

I worked my body to death. I starved myself then binged with disappointment. I fell into familiar and unhealthy patterns as a way to horribly cope with not feeling like myself in my own skin.

I also got sick. In September, I suddenly felt as completely and randomly awful as I did while I was pregnant with my son. I had an entire laundry list of digestive symptoms and spent months experimenting with eliminating foods, seeing doctors, having tests and procedures done–to include an endoscopy during which I woke up (a horror story for another day). The months of misery went by, and all doctors seemed to think childbirth had undone my gallbladder. A restrictive gallbladder diet did help but certainly did not cure anything.

Then, a couple weeks ago, as quickly as the symptoms appeared, they vanished. The only correlation that I have been able to make is that the symptoms appeared when I weaned my son and resolved themselves as soon as the milk finally dried up. With how much the sickness felt like when I was pregnant, it would not be a stretch for me to see it as hormone related.

Whatever it was, I do not care as long as it is safely behind me in last year.

So I come to this year a bit bruised and beaten from last year, both of my own device and circumstances beyond my control, yet I am angling for a fresh start. I mean to put all the poor decisions and uncomfortable periods behind me and start over fresh. The timing on my mystery sickness seems to support such an approach.

I do not really do resolutions, but if I did, they would be the same as my day-to-day goals.

To work my way to a body that feels healthy and like my own.
To accept my body for what it is and what it does not need to be.
To get back into running in a way that is realistic for the current state of my life.
To continue to indulge in other fitness that makes me happy or stronger.
To get stronger and include the strength training I loathe in my routine.
To have a healthy relationship with food that is neither restrictive or indulgent, a relationship that lets it just be food instead of something more emotional and controlling.

That’s it. Those are my goals for this fresh start and this new year.

I took vacation over the holiday, traveling to England with my family and I TOOK VACATION. I ran once in Wales, just a short gaunt on a dribbly day. Beyond that, I did NOTHING for two weeks. Except eat. And eat a lot. And drink. And drink even more. It was glorious; it was necessary, but I certainly could not have continued on that way another day.

This week, even still recovering from a European cold, finds me back to my routine. Back at the gym. Back on the trail. Back to eating and drinking more reasonably. The first step this year has been a good one; hopefully the ones that follow behind remain in a similar track.

Two survivors search the ruins of America for the last strain of humanity. Marcus believes they are still human; Parker knows her own darkness. Until one discovery changes everything.

Beatrix woke up in a cage. Can she survive long enough to escape, or will he succeed at breaking her down into a possession?